What would you do if I gave you $1 million today on the condition that you invest it entirely in the stock market?

First off, you’d probably find someone who knows way more about investing and get some professional advice.

But in lieu of that, you’d divide your money among a variety of bets:

The thought of putting all $1 million into a single company probably wouldn’t cross your mind.

Someday soon, I’d like to think a year of my time will be “worth” more than $1 million. So I won’t be putting it all into a single company either.

Instead I’ll build a startup a month for the next year.

The first person to popularize building 12 startups in 12 months is Pieter Levels, who launched products like NomadList and RemoteOK in 2014.

Since he operates both as open startups we know they make a combined $600,000 per year.

Not bad for a solo founder with a part-time sys admin.

In the 5 years since, several others have taken the same challenge.

Jon Yongfook started at the end of 2018, and eventually founded BannerBear. In the year he’s been working on it, it’s grown to $5.1K MRR (monthly recurring revenue).

When I was chatting with Dominic Monn about the idea, he told me he’s had success with this approach too:

I did something along the same lines where I launched 6 things in about 6 months in 2018 and two things grew out of it that make around $3.5k MRR together today, and some of the others I sold for a cumulative 5 figures as well.

The common thread is that no one doing the challenge completes it.

The goal is to eliminate the most common blockers from shipping a product: failure to stick to an MVP and finish something, fear of shipping, launching, charging money, and so forth.

Now, each of these things has to happen inside a month.

The idea is that a fixed timespan helps you quickly find a few ideas worthy of your undivided focus.

Instead of spending years working on an idea that won’t pan out.

I’m under no illusion that since Pieter’s very public success, a ton of people have undergone the same challenge.

Few, if any, have seen the same financial outcomes thus far. The majority still work their day jobs. And a quick search on Google reveals that most people don’t make it past the first 2-3 startups.

That’s why I’ve adapted the challenge to tip the odds in my favor.

That’s one of the biggest things I’ve learned about startups: it’s dangerous to go alone. You want people around you who’ve been through this before and are willing to openly share their experiences.

This is the main difference in our approach to building 12 startups in 12 months: We’re not going alone.

We’ve created 12x Startup: A cohort of 4 motivated makers, each building their own “one startup per month”.

Each day, we post our current task on our public status page. We correspond regularly in Slack, challenge each other’s ideas, and plan to livestream our monthly demo sessions for you to tune into. 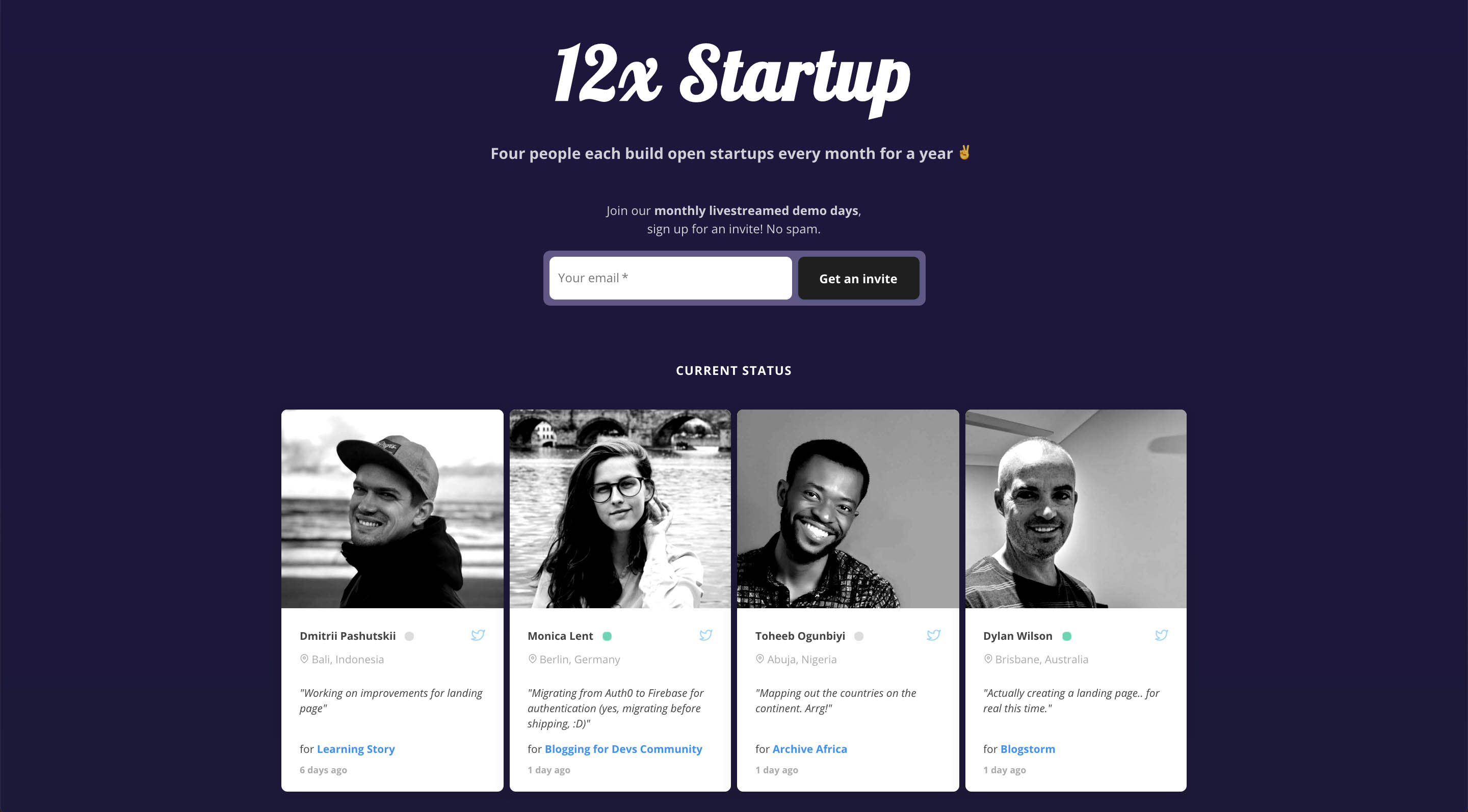 Apart from those of us who’ve built other types of profitable projects before, we’re also inviting advisors who’re a bit further down the path than us.

This approach was inspired by my experience with Weekend Build.

Knowing that I had to present progress every week to the group was a healthy amount of pressure.

Having other makers to learn from, plus expert advice from Ryan and Vedika, changed the trajectory of our affiliate analytics tool in 8 weeks.

But I can’t shake the feeling…I’ve made building my first profitable startup much harder than it has to be.

If there were a master list of first-time founder mistakes, I’d probably check most of the boxes.

18 months into that project and I’m not giving up.

But I am giving myself room to experiment.

So what “counts” as a startup? In his original post, Pieter addresses the myth that a startup has to begin as a world-changing company with $1B valuation potential.

So for the purpose of 12x Startup, here’s my personal definition:

An idea in the form of a product that resonates so deeply with a target market of sufficient size, it’s worth seeing where you can take it.

Or, to summarize in a word: Momentum.

The first evidence of momentum among my projects came in May when I launched my newsletter. In just 5 months, it’s grown to over 3.8K subscribers with next to zero marketing.

When there’s momentum behind what you’re creating, my suspicion is you just know it.

That’s a bit like what I’m looking for, within a few constraints.

The multitude of paths to a million dollars a year

Let’s come back to that $1 million investment we were talking about.

That is to say, you can make a lot of money by selling information-based products (“info products”) like ebooks, online courses, substack subscriptions, and so forth.

That’s why it’s popular advice to start with a small ebook or a mini course before graduating to SaaS.

Building a SaaS product is just a much, much slower and more difficult path to a million dollars or even “ramen profitability”.

A quick ebook launch can put thousands of dollars in your pocket in a matter of weeks and fund the next venture.

In comparison, our first $2K in SaaS revenue took almost a year to arrive.

Which is to say, I didn’t follow any of this advice about starting small and building a tiny info product.

Like developers do, I dove headfirst into building something out of software.

There are a few reasons I think I made the right decision, and will continue to do so for the 12x challenge.

Here are the top two:

If I had to add a third, it’d be that it’s just more fun to build software products.

The 12x rules of engagement

With these motivations in mind, I’ve placed the following constraints on my personal attempt at the 12 startups in 12 months challenge:

To elaborate on the last point: I have other unique skills, connections, and advantages above other people who might build the same products.

This includes things like my existing following on Twitter and my newsletter, experience working in a high-growth tech company, and an existing SaaS codebase full of reusable material.

I’m not here to prove you can build a startup in a vacuum.

Keeping with tradition, this article will be updated on a monthly basis with each startup I add to my personal portfolio.

If you want to keep an eye on my progress, you can follow along on Twitter @monicalent and on our status page at 12xstartup.com.


Initial idea: I’ve been all over the map in terms of my plans for a community for subscribers of the Blogging for Devs newsletter.

First, I wanted to do a small group of women who blog. Then I had so many requests for a Slack or Discord that I ended up launching a free, invite-only community built on Circle, capped at 100 free members. 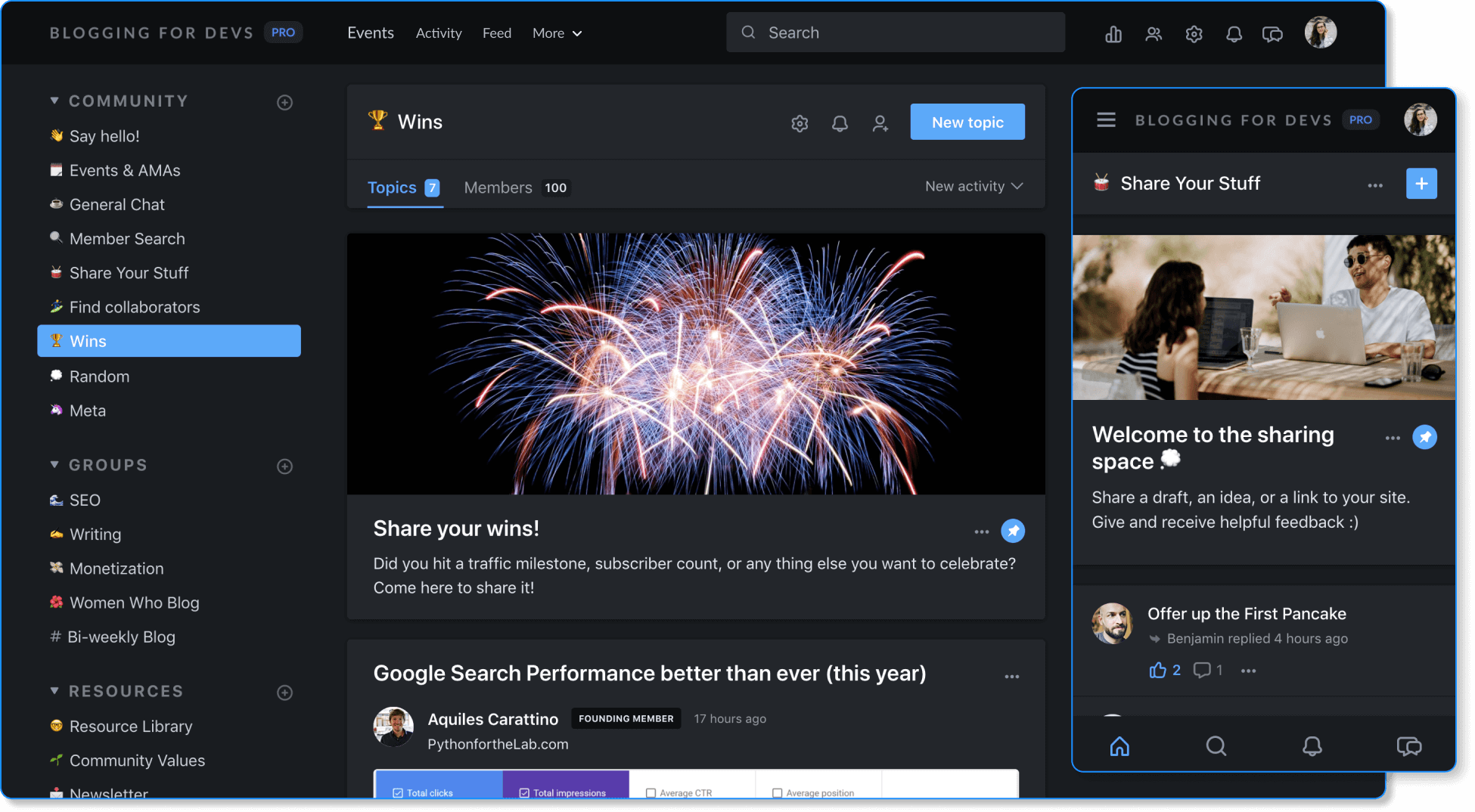 This month, I’ll convert it to a paid community for future members and adding more community features and premium content.

(You could say it’s cheating slightly because I’m not starting from scratch, but I’m losing 10 days of the month to my only vacation this year so 🤷🏻‍♀️)

Here’s my planned scope of work for the next four weeks:

Update: As an update, this startup has been launched and earned $5K in revenue during the first week, and $6.9K revenue by Nov 25th (three weeks post-launch).

Here’s my full article about launching a paid community. The tweet where I gradually built this in public is available here and the launch tweet is below:

Launching the day before US elections, what could go wrong? 😁

Just launched the first of my "year of startups":

The Blogging for Devs Community 💫 A private community for devs focused on growing their blogs through feedback & collaboration. Here goes!https://t.co/keRonb77qm


Updated #2: I accidentally launched on Hacker News because someone else submitted my launch recap article. Skeptics aside, the community ended up reaching 100+ paid members in the first month thanks to Hacker News.


Initial idea: My plan is to crowdsource recommendations for the best tech blogs across a number of tech stacks, written by individual developers.

With this seed data, I’ll generate “Top 50” lists of the best technical blogs across a variety of topics, designed to help people discover amazing authors and attract people to the newsletter.

This follows my hypothesis that developers who want to read great technical blogs also want to write them.

Which blogs are best will be curated by me for quality, then ranked by engagement on Twitter, favoring unique mentions and word-of-mouth recommendations by other developers. 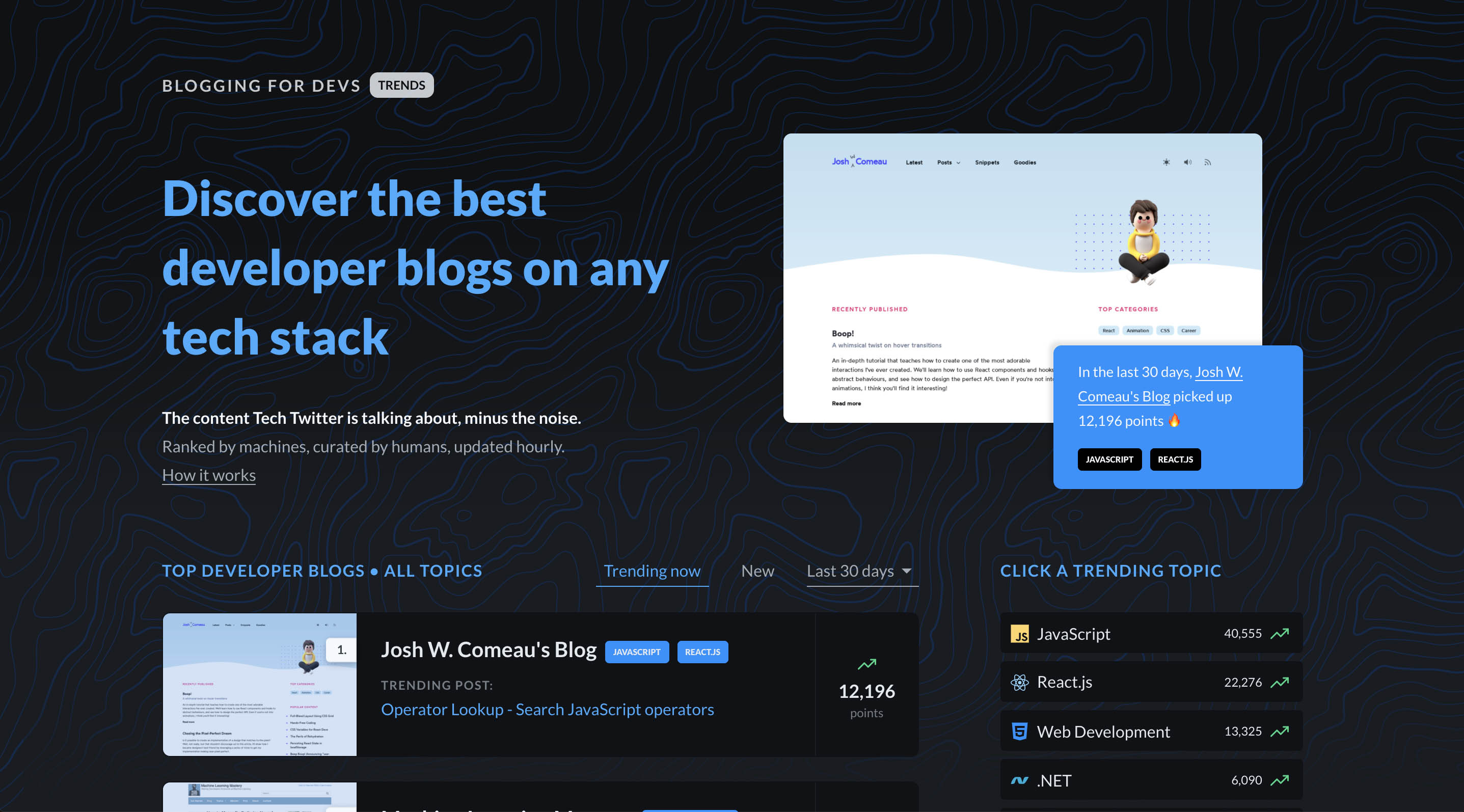 In turn, these each of the topic pages will (hopefully) rank for relevant keywords in Google, driving search traffic to the website every month.

Trends is meant as a growth channel and is not intended to generate revenue.

For now, I expect it to be the final “product” in the Blogging for Devs triad: Newsletter, Community, Trends.

Update: The launch on Twitter has gone really well, with 190,000 impressions, 4.3K clicks, 1.5K likes, 353 retweets, and 70 replies on the launch tweet by the Sunday evening after a Friday night launch.

You can see the launch tweet’s stats here.

Check it out & tell me what you think!https://t.co/UbrmruW9fN

As my original goal was to pick up backlinks, I’ll be monitoring how well it worked in that respect. I’ve since modified the rankings to more prominently promote the newsletter, so we’ll see how it goes!

I took off December from the 12x challenge, as I spent most of it kind of managing previous launches and projects:

For February, I have one big project (Craft Your 2021 Content Plan Workshop), so I needed something I could launch with the few remaining days in February.

Initial idea: I already have great word-of-mouth referrals for the newsletter.

Now that I’m at about 5,800 subscribers, I’ll boost the referral rate by launching a simple newsletter referral program. This will help towards my goal of 20,000 subscribers by the end of 2021.

This will include a few elements:

It shouldn’t take more than a few days of focus…I hope. 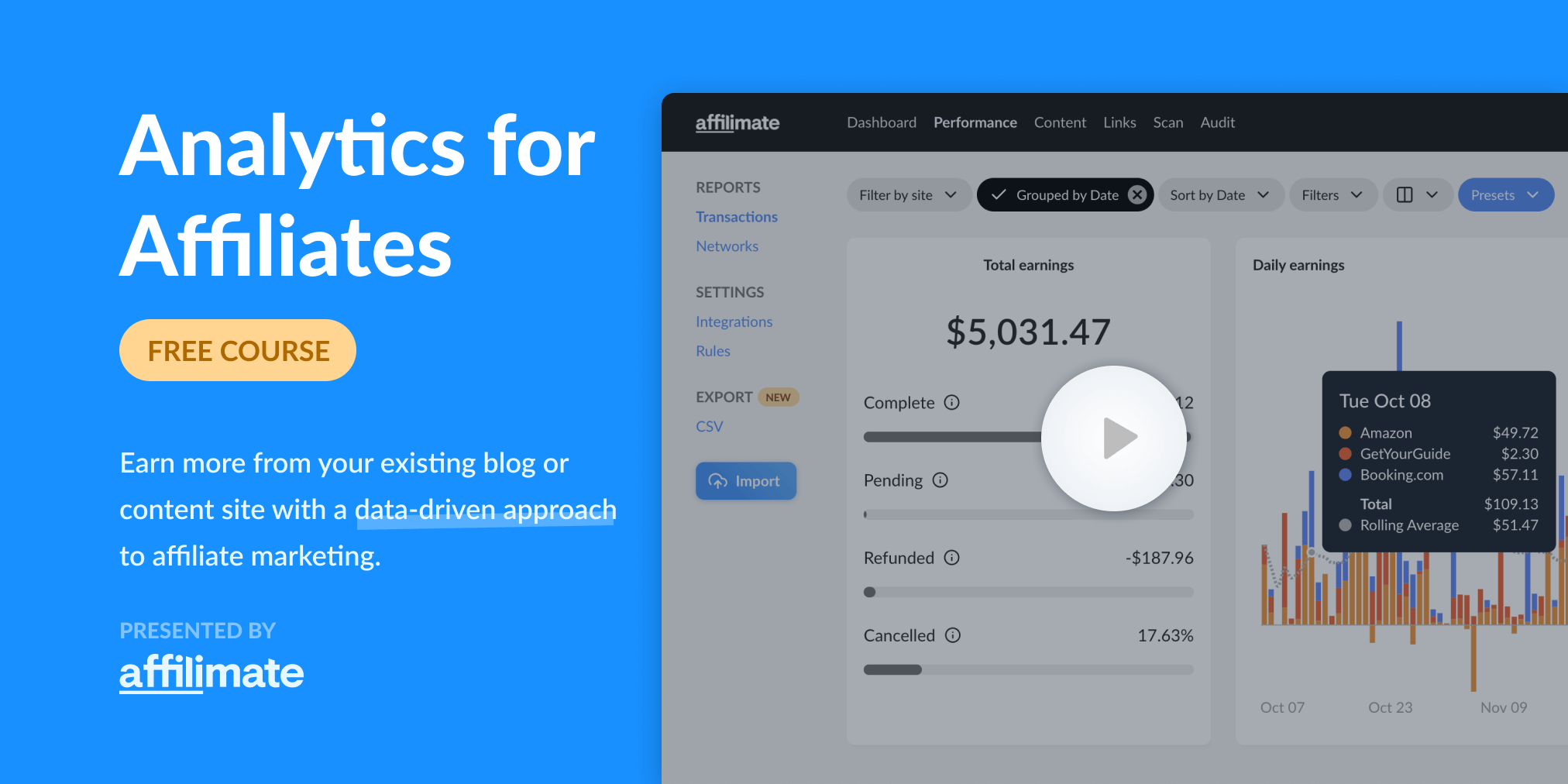 The goal is to make the absolute best, free affiliate marketing course. It should be so good it could be paid.

Started my next project ✨ A free course for users of my SaaS tool, @affilimateio.

The idea is to turn the onboarding into something good enough to be a standalone product. But making it free 😇


I’ll launch it to our existing (but honestly, cold) email list of customers, expired trial users, and blog subscribers. I’ll also build a waitlist for it by updating the website.

That’s all for now! If you want to follow along as I build over the coming months, you can find me on Twitter @monicalent.

Each one will be built in public, shipped in one month, with progress & learnings shared here on Twitter.

Here's why I'm doing it and what I'm building now ⤵https://t.co/kDdg2hZfN4

Software developer, maker, blogger, and domain-hoarder. Former tech lead and manager. These days I write about building your own products as a developer.

Learn about building products as a developer

Get a once-per-month email with my latest article and additional details about my launches, products, and experiments ✨

No spam, sales, or ads. Unsubscribe as your heart desires.

Learn how to create a custom ConvertKit form that tags your subscribers based on their interests with Hugo or Gatsby. 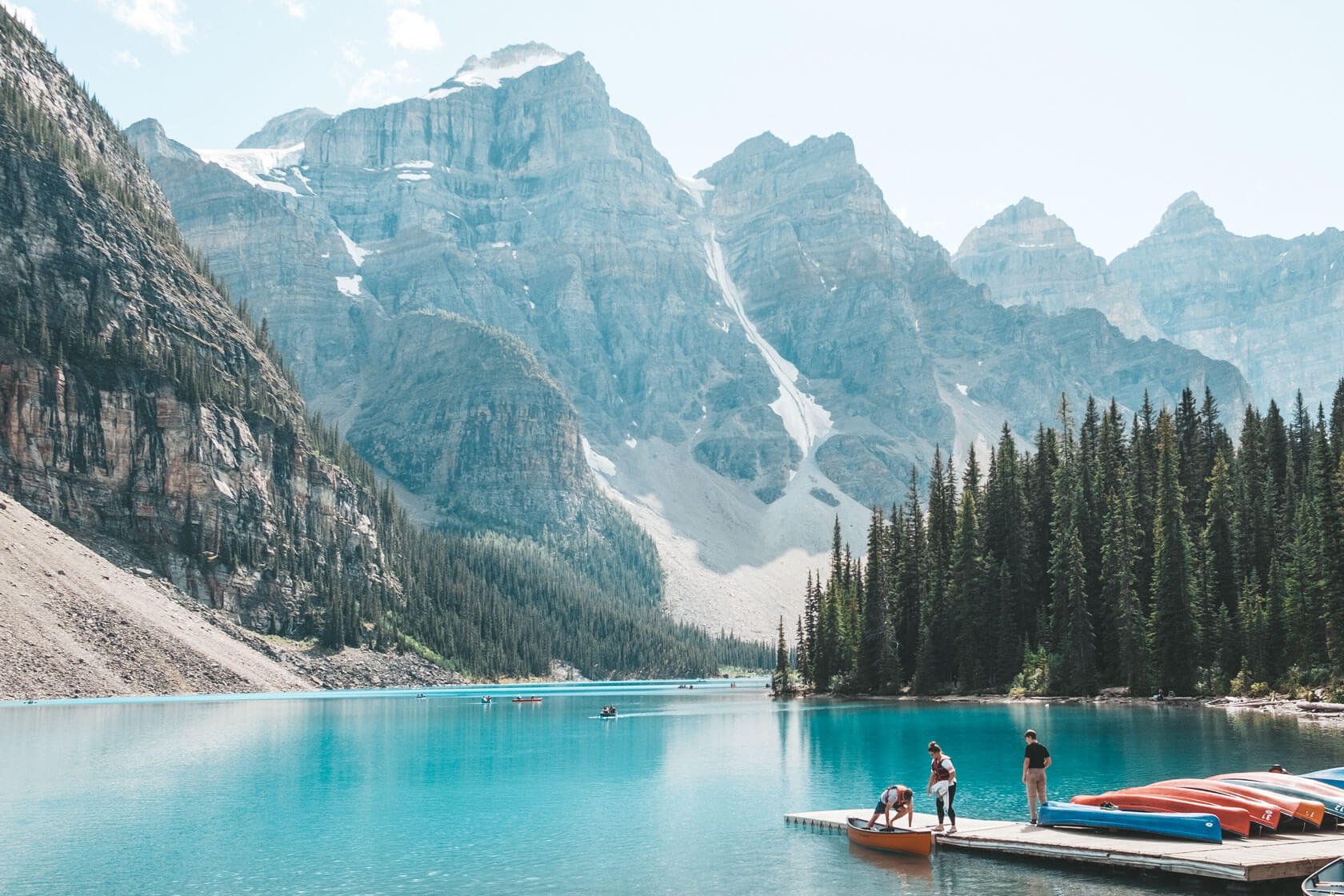 How I launched a paid community in one month and my plans to grow with generated content for SEO & side project marketing.